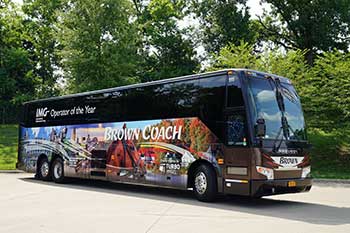 The International Motorcoach Group (IMG) announced Brown Coach, as the 2017“ Operator of the Year” at their annual Strategic Alliance Meeting in Nashville.

The award was accepted by Stephen Brown, Vice President, Brown Coach, on behalf of his brother Robert, their families and the entire team at Brown Coach who made this recognition possible.

Each year, IMG recognizes one of their own for this great honor, with the award based on a criteria of: operational excellence; safety performance; best practices; community and motor coach industry involvement; and engagement within the International Motorcoach Group (IMG).

A panel of the past three winners, Autocar Excellence, Starr, and Southern Coaches had the unenviable task of choosing the eventual winner. In front of IMG member and partner companies, Brown said: “Over 17 years ago, we were invited to become a Shareholder company of IMG. Our involvement in the IMG organization has helped Brown Coach achieve many milestones, raise the bar in service excellence, and grow to where we are today. I am truly honored to receive this award.”

Brown Coach began in 1980 with just 9 motor coaches that proudly bear the family name. Over 37 years the company has grown into a diversified fleet that provides charter, commuter, and tour services with 36 motorcoaches and over 225 school buses. Brown Coach has been active in many areas of IMG, including the development of the IMG Driver Training program, one of the first such training programs in the industry.

Learn more about IMG Industry Partners who help our motorcoach companies provide the best service to their customers.

Do you love driving and meeting new people?
If so driving a Charter Bus is the job for you!